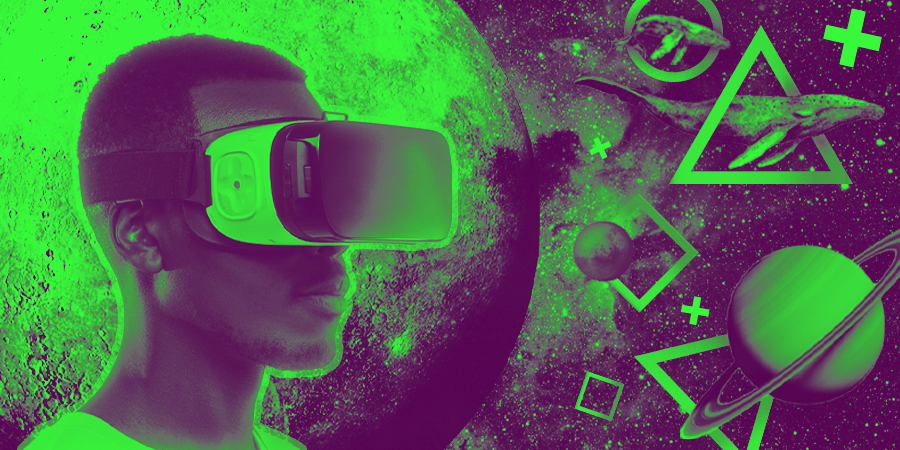 Regardless of whether a wound is chronic or due to trauma or burn, wound patients often report that dressing changes are by far the most painful part of their recovery process. In fact, a 2015 study examined dressing change pain in over 500 patients with various wound types and found that 74% of those patients suffer from moderate to severe pain during dressing changes.

Opioids tend to be the primary method of pain treatment among wound and burn care patients yet also come with the potential for negative side effects, possible dependence, and increased hospital stay. But researchers have suggested that virtual reality can provide as effective pain relief either alone and in addition to corresponding dosages of concurrent systemic opioid analgesics.

Select hospitals have already experienced positive outcomes from such an approach. Upwards of 200 patients recently used virtual reality for in-patient pain management at Hoag Hospital in Newport Beach, CA “Some have even told us, ‘This gives me more relief than the morphine,’” Dr. Robert Louis, neurosurgeon and Director of the Skull Base and Pituitary Tumor Program at the hospital’s Pickup Family Neurosciences Institute, recently told Forbes.

As part of the VR program at Hoag, patients can have close encounters with a graceful blue whale. Another option is having patients gaze at a dead, barren tree. As they take long, deep breaths, the tree starts growing and blooming.

Here are a few studies of VR and pain management that show powerful results:

When VR is part of treatment, the need for opioids dropped by almost half.

A 2018 study, published in Journal of Burn Care & Research, of 18 adult wound care patients using VR during treatment found that the amount of opioid administered during dressing changes dropped dramatically from 29.2 mcg/kg without VR to 17.9 mcg/kg fentanyl with VR. Additionally, 75% of participants said they wanted to use VR for during future dressing changes.

The use of VR reduced the “worst pain” ratings of pediatric severe burn patients by almost half.

In 2019, Frontiers in Human Neuroscience published a report examining whether immersive virtual reality can help reduce the pain for children with large severe burn wounds during wound cleaning in the Intensive Care Unit. The study followed 48 patients at Shriners Hospitals for Children in Galveston Texas, who ranged from 6 to 17 years old and averaged a 40% total body surface area burn.

The patients were able to use a new water-safe VR system that consisted of a robot arm goggle holder that held the VR goggles near the patients’ eyes, allowing them to throw snowballs using a wireless mouse within the virtual world of SnowWorld, a non-profit VR world specifically designed for pain distraction of immobilized severe burn patients. VR significantly reduced patients’ “worst pain” rating from 7.09 to 4.29.

A 2000 study of 2 teenage patients undergoing intense and painful wound care dressing changes reported significant reductions in pain during VR when compared to video games. One patient, who was under extreme duress during treatment due to having burns on over 33% of his body, reported a 50% or greater reduction in both pain and anxiety while using VR in comparison to video games.

The patients had been immersed in SpiderWorld, a program that had initially been developed to combat arachnophobia, but was considered the most distracting VR program at the time. It allowed the 2 patients to walk through a virtual kitchen, open windows and drawers, and even pick up a tarantula — which appeared both in the virtual environment and the physical environment suspended over the patients’ bed — to make the sensations all the more real.

On a pain scale of 1 to 10, patients reported a drop in pain severity of nearly 4 points during the use of VR.

A 2008 study, published in the Clinical Journal of Pain, that examined burn wound care pain management using VR found promising results. Eleven patients who rated their pain from severe to excruciating were submerged in a hydrotherapy tank as part of their wound dressing changes. While using VR during treatment, patients’ pain ratings on average dropped from 7.6 to 5.1. Six of the patients’ reported pain ratings dropped significantly, from a 7.2 to a 3.7 while using VR.

Patients have reported a 75% reduction in discomfort while using VR during dressing change.

At Rockyview General Hospital in Canada, patients undergoing wound care can hunt for dinosaurs, sunbathe at a peaceful lakeside campground, or embark on a magical under-the-sea experience swimming alongside dolphins.

Graydon Cuthberson, a patient at Rockyview suffering from the effects of compartment syndrome after a bad fall, started using VR during his wound care dressing changes after his first procedure caused him to go into shock from the pain. “Instantly it was so much better,” he told the Calgary Herald. “It totally took down the stress and anxiety of going through [dressing changes]. Your mind forgets where you are.”

Other distraction-based options such as music, TV, and video games have been considered in pain management of wound dressing changes, but their benefits are thought to be theoretical and little research has been done to confirm their effectiveness.

Yet as the studies above show, VR has been able to produce a particularly effective form of distraction because of its ability to occupy a large amount of the patient’s conscious attention while taking focus away from the simultaneous nociceptive sensations occurring during dressing changes. Neuroimaging studies have also seen that use of VR reduces pain-related activity in the brain.

But while the effects of virtual reality and pain management are still being understood, its potential is limitless. There is ongoing research for its use in the management of cancer pain, dental pain, and cerebral palsy, among others.