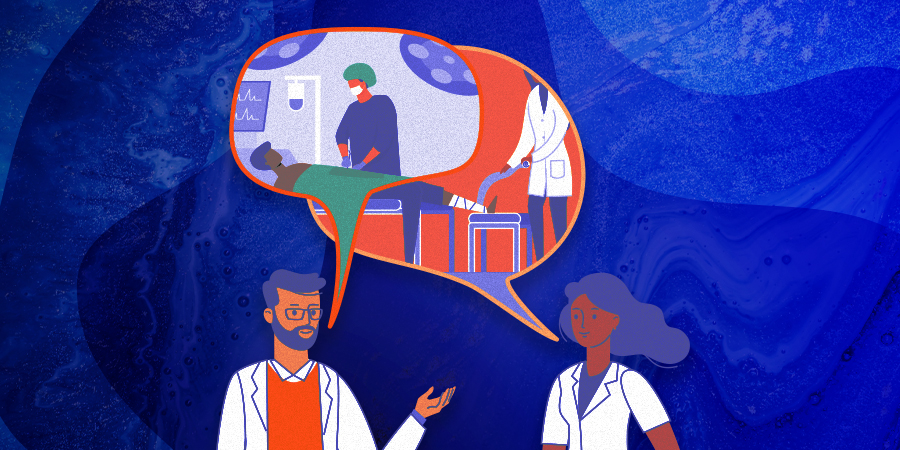 Frank Aviles, who oversees wound services at Natchitoches Regional Medical Center in Louisiana, remembers being at home on a Saturday when a surgeon called him. The surgeon was so concerned about a patient’s large wound that he wanted to drive over, pick up Aviles to examine it together.

Aviles suggested opening the patient up so the surgeon could see the entire wound bed. Then, thinking his work was done, he left the room. Minutes later, he responded to an urgent page and found the patient sedated, the wound open and clearly infected, and the surgeon with his hands up saying “Ok, what now?”

This collaborative approach may sound unusual, but it doesn’t have to be. As a wound care physical therapist with 30 years of experience and who also serves as a PT/wound care expert at Louisiana Extended Care Hospital-Natchitoches, Aviles’s knowledge and training has prepared him for complex wound management with a goal of closure and return to function.

Surgeons may be very open to wound care PT expertise, but they may not always be aware of what resources are available to them, says Stephanie Woelfel, director of clinical physical therapy-hospital outpatient, at Keck Medicine of University of Southern California. Wound care PTs are proficient with dressings, wound vacs, selective debridement, wound cleansing, edema reduction and control as well as tissue stimulation. Some hospitals have an extensive roster of wound care PTs, while others may not have any.

“Open wounds result from internal (e.g. vascular insufficiency), external (e.g. burn injury), or a combination (e.g. diabetic foot ulcer) of factors and can be complicated by various comorbidities (nutrition, drugs, disease, genetics),” write the authors of a special report for the American Physical therapy Association’s Wound Management Special Interest Group, “optimal patient care is accomplished through coordinated, collaborative practice that incorporates the very best that each discipline has to offer.”

It’s All About Timing

Most PTs are called in as soon as an acute care patient is medically stable post-surgery, but requests can come before or even during surgery. Melissa Johnson, who spent 6 years working at Johns Hopkins and is now Director of wound care for 3 Piedmont Healthcare hospitals in Atlanta, recalls seeing patients in the intensive care unit with large extensive abdominal wounds.

“Or we’d have an acute patient with necrotizing fasciitis and wound care PTs were managing and doing the wound vac in the operating room. Then post-surgery, we treated the patient as the wound progressed and filled in. Once that happened, the surgeon would take them back to the OR for a skin graft.”

A Team Approach to Restoring Function

Optimizing patient movement post-surgery is where a wound care PT excels, said Woelfel, who is also assistant professor of clinical physical therapy and surgery at the University of Southern California. She recalls a 56-year-old man whose necrotizing fasciitis had eaten off the flesh from his right lower leg. The surgical team even brought a PT into surgery to achieve alignment on just what kind of healing was ahead of them.

“Sometimes, with really extensive skin grafting, you don’t want them to be mobilized because the focus is on getting the grafts to take,” Woelfel says. “In this case, the surgeons did the anterior and posterior leg first. We used some advanced dressing techniques that protected the skin grafts but allowed us to get the patient up and moving.”

“It was useful being involved early because it helped the patient and we were able to rehab the patient’s leg in order to maximize mobility,” she says. In another case, a trauma surgeon planned to amputate a patient’s leg very high on the thigh. After consulting with Woelfel, the surgeon chose a hip disarticulation amputation instead because it would be more efficient for patient mobility.

Wound care PT Rose Pignataro has seen delays between when PT could be beneficial versus when PT is called, but says that’s often because surgeons and other healthcare professionals aren’t aware that some PTs undergo an additional certification process for complex wound care.

“An early referral doesn’t hurt,” she says. “If I come in early and it’s not needed, it’s better to have asked for the PT referral. Some of my frustration comes in when I get called in so late in the game when so much could have been prevented with moderate intervention. But PTs also have to be proactive in our communication with surgeons, and I don’t think we always do the best job at that,” said Pignataro, a practitioner for more than 20 years who also teaches graduate level wound management courses.

Surgeons and wound care PTs could improve collaboration when it comes to patient dressings, Pignataro says. Sometimes she’ll receive orders for wet to dry dressings 3 times a day for a wound but says every wet dressing change interferes with new cell growth, lowers the wound temperature and decreases circulation. That’s where wound care PTs can bring their expertise to the table, she says.

Johnson says PTs who do complex wound care every day may know about advanced dressing methods or the latest equipment before a surgeon does. “They look to us to recommend those things, and I’ll often bring in articles, especially if it’s a newer product,” says Johnson, who is also an adjunct professor in wound care at Nova Southeastern University.

Product innovation in complex wound care has taken off in recent years. There are now multiple solutions to all aspects of wound care, whether the injury is from trauma, burn, necrotizing fasciitis or something else. Due to the complex nature of these wounds and possible co-morbidities of the patient, a team-centered approach could be patients’ best chance for restored function.