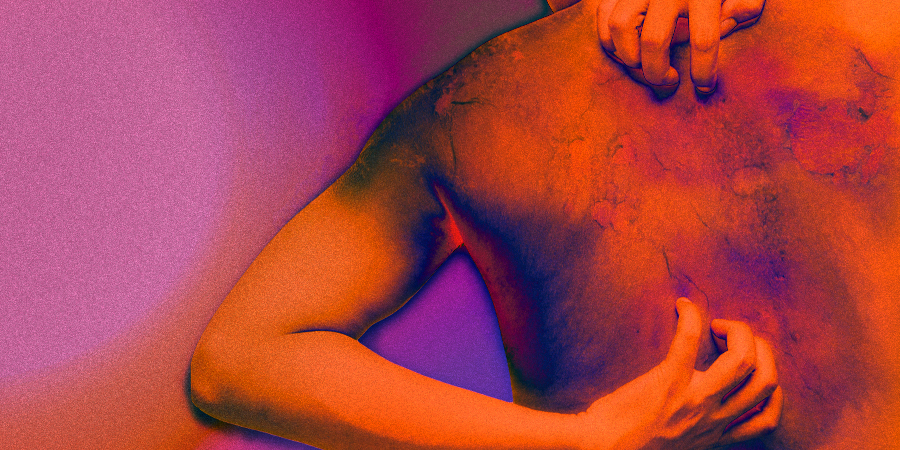 Robert Strawder woke early one morning to his bedroom curtains engulfed in flames. He raced out of his apartment building, before collapsing from stress, exhaustion and an inability to breathe.

His next memory is waking up from a medically induced coma seven weeks later, having sustained third-degree burns on over 75% of his body. After countless surgeries and rehab sessions, Robert decided to join a support group organized by the Alisa Ann Ruch Burn Foundation.

“It’s the itching,” was his opening line as he spoke for the first time at the support group. Robert was surprised to find that he wasn’t alone in dealing with post-burn pruritus, a debilitating condition.

The Measurement and Perception of Pruritus

A landmark study from 1991 by Vitale et al. researched the incidence and severity of post-burn pruritus and measured the severity of itching using a visual linear analog scale where 0 is equated with no itching and 10 was equated with itching so severe it caused bleeding.

Other methods of measuring post-burn pruritus severity are the Numerical Rating Scale (NRS), where patients can rate the intensity and itch-related distress of their injuries on a scale of 0 (no itching/distress) to 10 (excruciating itch/a lot of distress) as well as the verbal rating scale (VRS).

Additionally, the 5-D Itch Scale is also often used, in which physicians ask burn patients to rate the following of their itching, according to the Model Systems Knowledge Translation Center:

Yet the way that burn patients perceive their pain can vary greatly. According to a study published in the Journal of Burn Care & Research, of 72 burn patients examined, 40% reported experiencing pruritus. With regards to the type of pain felt, 46% described their pain as being a “pins and needles” sensation, while 13% reported a “stabbing” or “burning” sensation. Additionally, 7% felt an “electric” sensation, 4% felt shooting pains, and 32% categorized their pain as “other.”

The High Incidence of Pruritus

Vitale et al. found that 87% of burn patients reported itching. Out of those, 70% of those with arms burns experienced pruritus, while 100% of patients with leg burns reported itching. Those with a total body surface area (TBSA) of 40% or higher reported more severe itching as did those whose complete wound closure took longer than three weeks.

Another study that analyzed the prevalence of pruritus in adult burn patients, published in the Journal of Burn Care & Research, found that of 637 burn patients, those with thick or raised scars were 54% more likely to report pruritus. In addition to TBSA size, larger grafted areas were associated with more itching.

This study also found that severity and prevalence of pruritus was highest at discharge (93%) and decreased consistently throughout six-month intervals, with the lowest rating of 73% at 24 months post-discharge.

While post-burn pruritus may get better over time, persistent itching is a top complaint of burn survivors and may affect quality of sleep and daily life. There is currently no consensus on the best single treatment for pruritus and much of the therapies are used to diminish the sensation versus eliminating it entirely.

A 2013 study published in the Journal of Burn Care & Research suggests that aggressive use of antihistamine can be effective in relieving symptoms in the early phases of burn wound healing. Yet in the later stages of healing, these wounds appear to become increasingly unresponsive to antihistaminic therapy. In fact, a 2012 study published in Burns found that antihistamines as a sole therapy are only effective in 20% of patients.

A study published in the Iranian Journal of Kidney Diseases found that 58.3% of pruritus patients on hemodialysis who were given doxepin reported complete resolution of their pruritus, compared to just 8.3% who were given a placebo.

For burn patients, doxepin has seemed to have some success in relieving symptoms. According to the Model Systems Knowledge Translation Center, doxepin cream can help soothe itching symptoms by blocking histamine receptors found in the skin. However, it can only be used in small amounts and requires a prescription.

However, a 2020 report advised against the use of TCAs because of the potential for severe side effects, which can include akathisia, dysphasia, midline muscle cramps and Parkinson-like symptoms, among several others.

A 2020 report published in the International Journal of Molecular Sciences found that Gapapentin, which inhibits the release of excitatory neurotransmitters on voltage-gated ion channels in the dorsal horn of the spinal cord, showed significant improvements of pruritus in burn patients, in some cases exceeding that of antihistamines.

Researchers cited a study that rated patients’ itch severity using a visual analog scale (VAS), with a rating of 0-1 representing no itch, 2-5 mild itch, 6-8 moderate itch and 9-10 severe itch. Of the 20 post-burn healing patients in the study who were given only gabapentin as their method of relief, 95% reported a decrease in their mean VAS scores, and 85% reported no itch (VAS score of 0-1) by day 7 of treatment.

A similar study was conducted on 35 children who had been admitted to a burn unit with itching in healing wounds and were currently being treated with chlorpheniramine and trimeprazine. After 24 hours of treatment with gabapentin, all children reported a significant reduction in itching and were able to reduce or completely stop the use of antihistamines.

There has also been progress towards the use of non-pharmacological treatment options to help relieve the severity of pruritus. These can include moisturizers, cooling agents, pulse-dye lasers, massage therapy and transcutaneous electrical nerve stimulation (TENS).

In recent years, there has been an attempt to design and implement treatment strategies and algorithms, however, there is currently no agreed and consistent management plan for the treatment of pruritus due to burn injury.

However, it is important to relieve pruritus symptoms as soon as possible because if the itching becomes intolerable enough to lead to scratching, it can worsen and delay wound healing.