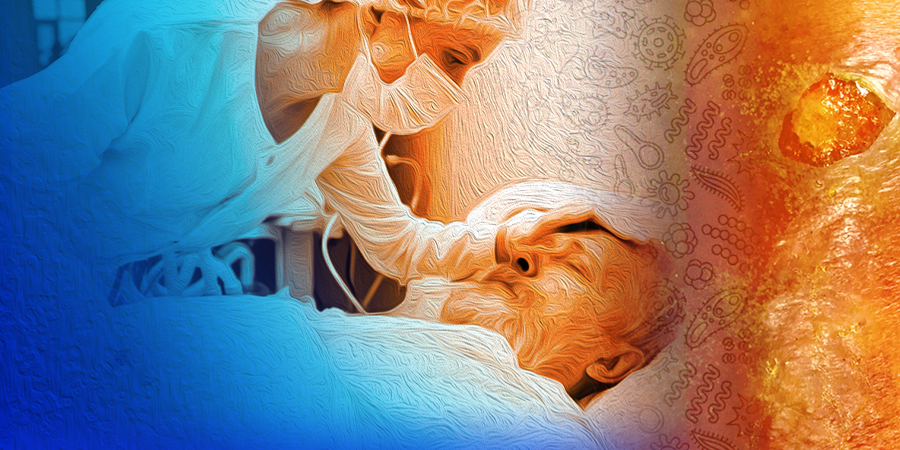 Although incidence estimates vary, there are believed to be over 30,000 cases of necrotizing soft tissue infections (NSTI) each year in the U.S., according to one study. But while necrotizing soft tissue infections are associated with high risks of morbidity and mortality, there is little research on factors associated with death or other poor outcomes.

In their 2020 study published in the Journal of Trauma and Acute Care Surgery, Horn et al. aimed to discover whether there were variables at the time of admission that were associated with mortality, limb loss, and discharge deposition in necrotizing soft tissue infection patients. Their study, to their knowledge, is one of the largest of its kind.

The study authors identified 446 patients with surgically confirmed NSTI from an NSTI registry. All patients had American Association for the Surgery of Trauma (AAST) Grade IV or Grade V soft tissue infections.

They found that the following adverse outcomes were linked to specific factors at admission:

Having a history of diabetes and perineal involvement were both associated with lower odds of death. However, the study authors note that Fournier’s gangrene has a much different mortality rate than necrotizing soft tissue infections that do not involve the perineum, and there is clinical suspicion that perineal and non-perineal NSTI should be treated as separate entities with unique clinical outcomes.

Among patients who had NSTI in the limb, patients with chronic wound as the etiology of infection, high glucose levels (> 180 mg/dL), transfer status, and diabetes had some of the highest likelihoods of amputation.

The study authors note that transfer status being an independent risk factor for amputation may be due to the severity of the underlying infection. They surmise that patients who require transfer may have a more complicated or aggressive form of the disease. Additionally, transfer status may be a marker of delay between initial presentation and adequate source control. This, they argue, requires further attention and research, as they consider regionalizing care for patients with necrotizing soft tissue infections.

Patients who had an injection drug use-related infection had lower odds of amputation.

For patients that survived to hospital discharge, older age, female sex, perineal involvement, amputation and transfer status were associated with greater odds of discharge to a skilled care facility.

After controlling for insurance status and history of drug abuse (which the study authors say can prevent discharge among their patient population), factors associated with skilled care facility disposition included age of 60-plus years, female sex, non-white race, perineal involvement and amputation.

Horn et al. note that some limitations of their study include that wound culture data was missing in 15% of patients, which they attribute to transfer status and debridement history. Additionally, the majority of their patients were referrals, which increases the possibility of survivor bias and may limit generalizability.

However, they note that their study has validated many of the previous factors associated with mortality while identifying novel causes and characteristics. It also highlights the misconception that while NSTI is often treated as a single disease process, it is a heterogeneous group of diseases that affects different patient populations that each present with unique challenges and clinical outcomes.

Further research should involve differentiating adverse outcomes in severe skin and soft tissue infections and the consideration of physiological data, patient comorbidities, or infection site/etiology. This, they believe, will help better improve outcome predictions for these patients in the future.

Can Sarcopenia Increase the Likelihood of Mortality in NSTI Patients?

In their 2022 retrospective cohort study, Castillo-Angeles et al. wanted to determine the impact of sarcopenia on mortality in patients with necrotizing soft tissue infections, as it has an increased risk of mortality on its own. Their study, to their knowledge, is the first to do so.

All of the 115 NSTI patients they examined from two academic institutions had preoperative abdominal or pelvic CT scans available. Thirty patients had sarcopenia, and these patients were found to have lower BMIs and lower glucose levels than non-sarcopenic patients. When calculating the Laboratory Risk Indicator for Necrotizing Fasciitis (LRINEC) score for these patients, there was found to be no difference between the sarcopenia and non-sarcopenia groups.

In the adjusted analysis, sarcopenia was found to be an independent risk factor of in-hospital mortality. Castillo-Angeles et al. surmise that sarcopenia may be a cause of poor nutrition and physiological reserves, which could lead to worse outcomes in this patient population.

From their findings, they suggest that physicians should calculate the psoas muscle area using CT images before patients undergo surgery for NSTI. Further research should consider whether sarcopenia assessments can complement existing clinical scores, which can potentially help surgeons in counseling their patients and their families.